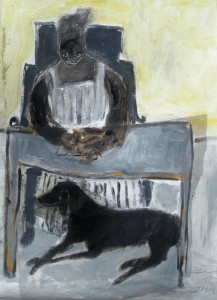 Gigi Mills is inspired by things she hears on the street, visual images she finds around her and an artistic need to simplify objects down to their fundamental shapes and colors. For Mills, her art is an attempt to quiet life down a couple of notches and simplify things to their essential components.

“I love shapes, pared down, abstracted shapes,” says Mills. “I like them to still be somewhat representational, or at least recognizable, just calmed down. I think my work is deceptively simple and by simplifying them, there is an elegance to them as I continue to try and say more with less.”

For the past eight or nine months, Mills has been experimenting with color and has found herself moving more and more toward a gray palette.

“I’m using grey tones because it allows for me to denote light and dark but in more subtle ways than with color,” says Mills. “I think it also evokes a certain moodiness to the work, which is nice to get. I’m really toning everything down and finding just beautiful, great palettes to use. They are all mixed—I don’t use anything out of the tube.”

Mills also work in series. Her latest series focuses on people in museum settings, typically in front of works of art.

“The museum pieces are the last in that series for me,” says Mills. “I don’t know where it came from but they all have the same colors but different women in period costumes. Some are contemporary, some are social commentary. I have a love affair with the South, though: southern women, southern cooking—I did a whole series of bakers and cooks, all from the South.”