Gallery Orange, New Orleans is proud to present Capetown artist Kurt Pio’s debut solo show in the US. Kurt’s work has been shown for years by leading edge designers and in such global magazines as Conde Nast and Elle Decoration. He became quite the phenomenon in the US when his works went viral on art and social media websites in early 2015.

His only previous solo show featuring the gemstone paintings was in Antwerp, Belgium, the diamond capital of the world. Now it is with great pleasure that Gallery Orange presents Kurt’s collections of gem and recent champagne paintings in his first solo show in America.

While he created his champagne collection for his own enjoyment as a celebration of his birthday, other viewers became enamored with this body of work. Sharing the public’s excitement, Gallery Orange feels a solo show is due, so we are pairing Kurt’s two bodies of work, the established gem collection and the newer champagne collection, in a one stunning show titled “Stone Sober”.

Kurt’s gem paintings grew from a 2011 experience as an artist-in-residence in Amsterdam. Feeling a bit homesick for his native South Africa, he began drawing patterns resembling diamonds and exploring the depths of South Africa’s natural resources. Inspired by the country’s large diamond and gem deposits and mines, he had the idea to paint a faceted object, like a gem, onto a similarly shaped canvas, thereby creating an especially spectacular work of art. To make his specially crafted and hand-stretched canvases, it took nearly 2 years of trial and error while working closely with a skilled woodcrafter. The results of this process are the lifelike and unique works of art for which his is renowned.

“In the early days of these artworks, no one really showed any interest,” Kurt said, “but I enjoyed the pieces and so I kept making them. It wasn’t until in 2014 did the gems really started getting a lot of press and art media attention and take off.”

Gallery Orange is always searching and striving to bring the best and youngest emerging talent to the easel and Kurt Pio is no exception. We are thrilled to host Kurt’s solo show at the gallery and look forward to introducing his works to new collectors and art lovers nationwide. 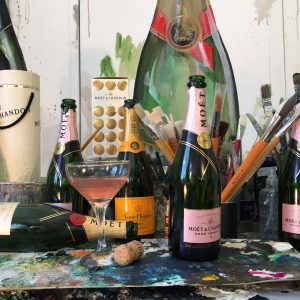